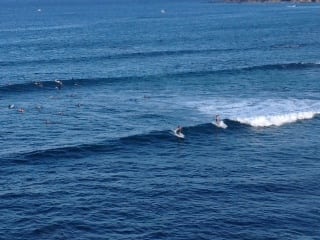 After building many relationships with various surfers in the Cabo area, I kept hearing them talk about this magical place I needed to visit that they call San Juanico but for “gringos” it is known as Scorpion Bay. It seemed that a Scorpion Bay Surf Trip would be in my near future. 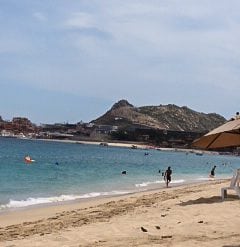 I began doing research on this place that seemed too surreal, the more people talked about it. Many locals would tell stories of how there are 6 points, it’s still a tiny fishing village, it is overall very untouched by modern amenities like wifi and even electricity can be scarce.  I heard stories that many surfers from southern California wait for the perfect conditions to flock to Scorpion bay in an attempt to get these magical waves that allow you to surf for up to one minute if the conditions are right.

Well with all these amazing stories, I knew I had to plan a trip. I had a local surfer/friend give me advice on what to expect, what waves to look for and which break to try. I did some of my own research but apart from finding some youtube videos, there is limited information on Bay. I decided to book my flight to Cabo and head out on a solo trip to find this infamous Scorpion Bay.

I flew into Cabo and after picking up my truck from my friend’s house, I headed to the local grocery store and stocked up on some basic supplies as I read that it is limited on what you can buy in town. I wasted no time and I began my 7 hour drive north up Baja California Sur.  I had some basic directions from my friend on the towns I needed to pass to get there and off I went. I had been reassured by many of my friends that there were no concerns of me driving alone on this adventure. It also helped that I speak Spanish so I knew that at least I could clearly communicate with the locals. 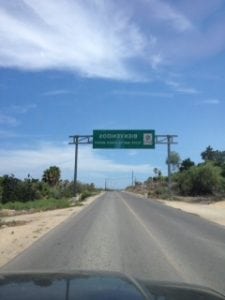 I was off on my surf adventure. Once I passed La Paz, I was surrounded by nothing more than the odd small town and dessert mixed with cattle farms. I had to stop a couple times to ensure I was heading in the right direction. The locals in all my stops were very friendly and helpful.  It was amazing how much clarity can come from driving endless hours on your own. I had moments of deep overwhelming emotion during my reflection of what I was about to embark on and the unknown. It really was a reflection of where I was in my life and openness of endless possibilities.

After crossing some amazing landscape, the sunset was quickly approaching, I finally made my way down a windy road that eventually lead me to a little fishing town hidden behind some hills that protected the beauty that was to come.

I drove through the town and since the waves were not the most optimal, it was very quiet with not many people around except for the locals. I followed a dirt road that went winding on a hill beside the ocean and as I took one major turn, I came face to face with the most amazing scenery I had seen up to that point in my life. I could clearly see three points, all connecting and carrying the waves for miles. I had to pull over, I got out of my truck and took a few minutes to truly take in the beauty that the ocean and the earth were providing. It truly was MAGICAL! 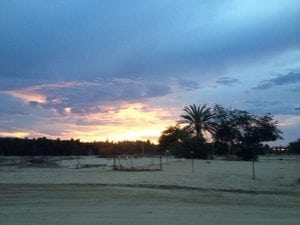 Since it was late in the evening, I decided to find a place to stay so that I could get up refreshed the next day to go hit some waves.  That night after around 9pm the town went dark, no lights could be seen as the town shuts off power over the night. The blanket of stars in the sky seemed out of a documentary. Surreal.

The next day I was ready to take on Scorpion Bay.  I had been told by a friend to surf point number three first because it would be fun and easy to catch some good long waves. I made my way to break three and it was so refreshing to find some seasoned surfers visiting from California. I sat on shore for a while and just watched and observed men and women who could have been my grandparents swim out and catch some smooth, perfectly shaped waves with ease. I watched as they danced with the waves with no fear. All I could think of was, I want to be those people when I get older. One man even had his extremely excited bulldog on his long board riding some waves. It was an awesome sight. I chatted with some surfers and finally I couldn’t wait anymore.

I grabbed my beautiful new Roberts August 9ft “What I Ride” yellow and blue long board and I was ready to give it a go. I attached my Gopro to the top of my board to capture some of my amazing moments. I waxed my board to ensure the grip was right for me and off I went. The waves connected so beautifully with each break that it was hard to determine where to stop and wait as the waves just kept developing no matter where you were.  I attempted to get up a couple times but kept missing the momentum of the waves.

Finally, I was sitting on my board and I saw what looked like a good wave on the rise and as I positioned myself to hit the wave, another surfing paddled past me and yelled, “you got this”. This was the motivation I needed and just like that, I was riding my first wave at Scorpion Bay! 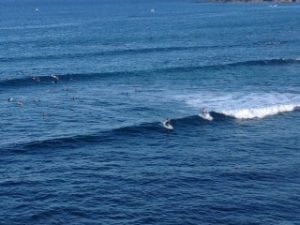 Article Written By: Carolin Ricciardi, a Mother of 4, who never gave up on her surfing dreams

If you have a great surf travel experience or perspective, like Carolin, we’d love to share your surf travel ideas, content or story! Just click here to find out how to write for Live Swell.